By Larry Robbin, Executive Director of Robbin and Associates 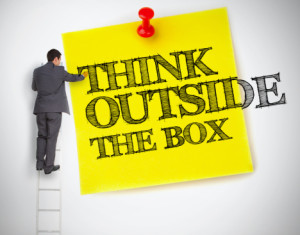 Businessman writing think outside the box on a post it

Maria did a lot of volunteer baking for her family, faith based organization, PTA and other community activities.  She loved baking so it was no wonder that when she got laid off from her job and went to an employment program they helped her get training as a baker. She did very well, but no one would hire her because she lacked commercial baking experience.  She did everything her employment counselor suggested, but still could not get a job.  Then she decided to try a different way to job hunt.  She did some research and found the name of the hiring manager at a large bakery that did a lot of wedding and other special event cakes.  One day the hiring manager was sitting at her desk when her secretary came in with a large box the size of a big pan cake that you would make for a large party or wedding.  When she opened the box there was a beautiful cake.  The decorations were flowers, birds, and beautiful writing.  It was Maria’s resume written with cake decorations!!  The hiring manager was blown away.  She did not know what to do.  She wanted to taste the cake, but did not want to disturb the beautiful decorations.  Finally, she brought other employees around and they tasted the cake.  It was fantastic.  She immediately called Maria and interviewed her that same day.  Maria was hired!!  What is the lesson? Think of innovative ways to get examples of what you can do for a company in front of the person that does the hiring!

Kenecia was a laid off computer programmer.  After six months of unemployment and traditional job hunting, she knew more about computer based job search than her employment specialist.  She had a fabulous LinkedIn profile, great Facebook page, outstanding twits on Twitter and went to all the networking events.  But she could not get a job.  She was downtown one day and saw someone using an age old method to sell a product and she thought this might work for her so she gave it a try.  She went and got some thick big sheets of cardboard and carefully put her resume on both of the cardboard sheets using eye catching big fonts and colors.  She made an old fashioned sandwich board that hung over her neck with the cardboard resumes on both sides. She went to a local high tech park where there were a lot of companies that had jobs she could do. She smiled at people and they came up and read her resume.  It took only seven days and then someone she talked to connected her with their manager for an interview. Kenecia got the job! What is the lesson?  Figure out nontraditional ways to network and get people to talk to you and look at your resume!

Luis was a laid off real estate salesperson.  He was Mexican and fluent in English and Spanish.  He was well known and connected in the Latino community from his last job and community work, but he had a hard time getting a job.  He was job hunting out of his home office.  He decided he wanted to make the office layout more efficient so he went to an office furniture store. He met another Spanish speaking customer there who was not very fluent in English and had a hard time communicating with the salesperson.  Luis acted as an interpreter.  Then it struck him!  Was this company getting any Spanish speaking Latino market share?  He asked the salesperson who was very happy that Luis helped him make the sale and the salesperson said, “No we don’t often get a Spanish speaking customer in here.”  Luis asked to speak to the boss. He made the boss a proposal. Luis said “Hire me as a salesperson and I will use my connections to bring in the Spanish speaking business customer.” Luis said if he could not do it in a month the boss should let him go. The boss hired him on the spot!  Luis reached out to all his community connections, spoke at the Hispanic Chamber of Commerce and made a flyer to hand out at community events. Some friends of his who played in popular mariachi bands distributed the flyer when they played. He also got an announcement in the local Spanish language newspaper. Soon the Spanish speaking customers were finding their way to the store. The boss had a new market share and Luis had a new job!  What is the lesson? Think of a special skill you have that an employer could use to increase their profits. Think of a type of customer you know well that is not coming to a business.  Make a proposition to the employer to use that skill and/or to bring in a new customers and make more money for the business in a new way.  Do not only look for job openings, but create a job based on what and who you know and sell it to an employer!

Ting had done a lot of work on cars and his dream job was to work in a car dealership as a mechanic. No one would hire him to do that because he had no work experience as a mechanic. The car dealerships in his town were clustered in an area people called Auto Row. There were a lot of dealerships and used car lots. There was also a diner where many people who worked in the auto industry went for breakfast and lunch. Ting focused his energy on getting a job in the diner. It took a few months of being appropriately persistent, but finally the owner hired him to bus tables. He got to know the people that worked in the dealerships and used car lots on a first name basis. He started talking with them about his car experience. One day one of the customers came in and said that his dealership was hiring a mechanic’s assistant. The customer had talked to the service manager about Ting and said the manager wanted to talk with him. That day after work, Ting went to the dealership and met with the manager. He was hired on the spot and started work the next day! Other people have used this strategy and became food delivery people, worked in art supply stores, lumber yards and in other jobs that would get them connected to people that worked in the businesses they want to target. What is the lesson? Try to get a job where you will have contact with people that work in businesses where you want to work. Get to know the people through your job and they can help you get a job you really want!

These are just a few examples of job search strategies that are almost never discussed in workforce programs. These creative approaches worked when traditional strategies could not open the door. It takes a combination of traditional strategies and out of the box methods to get a job offer in today’s highly competitive market. Give these examples to your job hunters and brainstorm how these strategies could work for them. They do not have to do exactly what these job seekers did, but discuss how the concepts can be used in other ways to help their job search. How could people use these lessons in their job search?

Think of innovative ways to get examples of what you can do for a company in front of the person that does the hiring!

Figure out nontraditional ways to network and get people to talk to you and look at your resume!

Think of a special skill you have that an employer could use to increase their profits. Think of a type of customer you know well that is not coming to a business.  Make a proposition to the employer to use that skill and/or to bring in new customers and make more money for the business in a new way.  Do not only look for job openings, but create a job based on what and who you know and sell it to an employer!

Try to get a job where you will have contact with people that work in businesses where you want to work. Get to know the people through your job and they can help you get a job you really want!

You should be encouraging people to be inventive and job hunt in new ways. Help them discover their creative side and use it in job search. This approach can also make job search more interesting. This will help people avoid job search burnout, which can happen when they keep job hunting in the same way day after day. When you get together with other workforce program staff, be sure your share the innovative ways job seekers have found to get the job offer. When a job seeker lands an offer by being nontraditional in their job search, make sure you email other job seekers and workforce staff to share the new technique. It could be that the out of the box strategy becomes the strategy that gets someone into the job!